In the hairstyling and fashion world celebrities are a big source of inspiration and debate. Today it's Lily Allen's turn to be in the spotlight. In the past our celebrity blogs have asked you who you think has better hair: Megan Fox or Angelina Jolie; we've pondered whether Rihanna's got a crazy or cutting edge short haircut, and we've wondered aloud about whether Lady GaGa is overrated (see “Lady GaGa Give Me a Break”). But now all eyes are on our Lily. Why? She's just been voted GQ Woman of the Year and she's got some seriously bad hair.

Lily Allen has created quite a reputation for herself and people seem to either love or hate her. She famously told Sir Elton John to “f**k off” (to which he replied with a rather sad comment about his ability to snort more cocaine than her) and photos of her looking a little intoxicated are commonly published on various quality websites like perezhilton.com. She sings pretty catchy pop songs, is a prolific Twitter fiend, likes performing in her underwear, and recently seems to really enjoy posing topless for fashion mags. All in all Lily's image and reputation is pretty much everywhere right now. 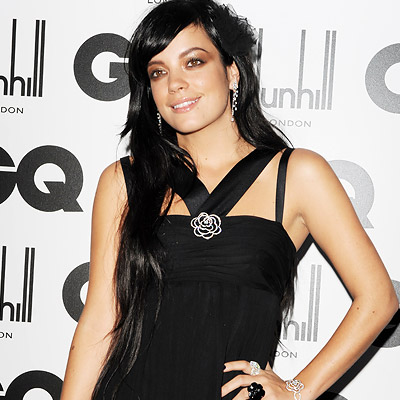 Her hair's usually spot on- usually. She's often seen with a shiny healthy bob hairstyle, and she's dabbled with platinum blonde a few times too. It seems she's not afraid of the wig either and since she changes her hair so frequently (she may in fact be bald under those wigs) it would probably be kind of cool one day for her to do a natural hair expose like Tyra Banks. But most recently- and coinciding exactly with her accolade as GQ Woman of the Year- Lily's hair has taken a turn for the worst.

Her length's nice, and the hair color too, but the rest... oh dear. The extensions are a little too obvious and the top's a confused mess. What's happening with those bangs? And those fly-aways need attention. Laid-back locks are a big hairstyle trend at the moment, but her new hairstyle just looks confused and jumbled. Lily: you really need to work on this hairdo!

Woman of the Year or Bad Hair of the Year? What do you think of Lily Allen's hairdo?

Apparently they're competing with each other for a movie role, so TheHairStyler.com wants to know who you think has better hair: Megan Fox or Angelina Jolie?

Check out Roger's top 5 list of celebrity hairstyles with a difference.