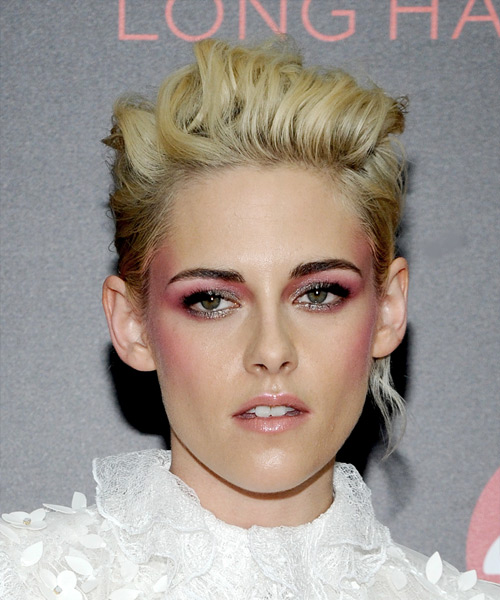 These platinum locks are slicked back while the top has been backcombed and smoothed high for a voluminous finish. This fancy upstyle is best suited to complement a square or triangular face. This look can be re-created at home with the right tools and needs product for shine and hold.

Kristen Stewart goes for an elegant up-do here that is ideal for a formal night out. Kristen has a triangular face shape with a wide, high forehead and pointed chin that looks great with most hairdos, especially up-dos like this one. Her medium-thick tresses have been teased to create maximum volume at the crown of the head while the rest of her locks have been styled to the back. Overall, this hairstyle works well for her face shape and high forehead, and makes the most of her naturally wavy hair texture.

Kristen is a natural brunette and, thanks to her warm skin tone and green eyes, should stay in the warm spectrum of hair color. Here she goes for a platinum blonde tone that flatters her complexion and highlights her green eyes nicely. The golden base brings out her eye color and ensures that she doesn't look "washed out", as may brunettes do when they go from dark to ultra light hair.

Kristen Stewart is an American actress. Stewart began her acting career in 1999 with uncredited roles and a minor character appearance in several films before gaining prominence in 2002 for playing Jodie Foster's daughter in the thriller Panic Room, which garnered her a Young Artist Award nomination for Best Leading Actress in a Feature Film. She then went on to star in the hugely successful Twilight series.


Try On This Hairstyle