The Perks of Being a Celebrity Dog

by Kate Summers (TheHairStyler.com)
Updated on November 09, 2017
TheHairStyler.com has the latest hairstyles and beauty tips as well as the latest celebrity gossip. If you thought you pampered your pet then prepare to be blown away by what celebrities like Britney Spears and Mariah Carey are getting up to. 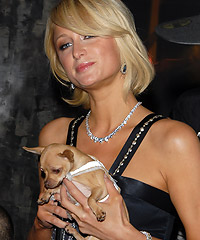 When youâ€™re a celebrity, youâ€™ve got the money and the opportunity to spend it on whatever you want. Designer clothes, hotted-up cars, the best hairstylists in the world and dogs.

Apparently youâ€™re just not a celebrity unless youâ€™re toting a pampered poochâ€“ preferably a tiny Chihuahuaâ€“ around like a handbag. Just ask Paris Hilton, who at last count had 17 dogs to run amok with her beloved Tinkerbell and to mix and match with her outfits, photo ops and interviews. And sheâ€™s not the only celebrity to splash her cash on her dogs.

Mariah Carey reportedly wanted to fly her dog, Jack, first class, but when that wasnâ€™t allowed she chauffeured him across country to be with her. Nicole Richie used to give her dog, Honey Child, the same colored hair extensions that she wore. Britney Spears went out and got her Chihuahua, Bit Bit, a $180 steak. And Julia Roberts regularly sends her dog, Diego, to a pet spaâ€“ in a limo!

While it might sound pretty glamorous being a celebrity dog, surely constantly being dressed up in little outfits, squished into designer bags and paraded around in front of the paparazzi would get a little tiresome, right? Ok, so it probably wouldnâ€™t. And neither would being fed food from high-end restaurants, receiving real diamonds (even if it is on a dog collar) and being ferried from country to country on a private jet.

But if it ever did get tiresome Iâ€™m sure Tinkerbell, Jack, Honey Child and Bit Bit could hitch a ride in Diegoâ€™s limo and spend some quality time getting tummy rubs at the day spa.