by Roger Dawkins (TheHairStyler.com)
Updated on November 20, 2017
*The following is the edited version of an interview I imagine I would do with actor/emo singer Jared Leto about his hair if I was an American talk show host. 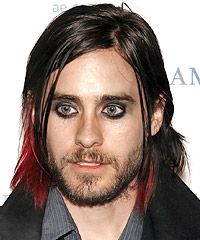 Voice Over: Jared's a bit of a hair god. You may have first noticed his extraordinary hair presence a few years back in the quirky film Requiem for a Dream. These days Jared's still making movies, singing in a band, and still prioritizing his haircuts, but... wait for it... he's turned almost... completely... EMO!!!

ROGER: Jared, Jared! Thanks so much for coming on the show! 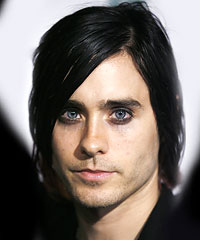 JARED: [Sits cross-legged, hands clasped together, peers sheepishly out from under his fringe.] Thanks. This is great. I'm... yeh. I'm overwhelmed...

[HYSTERICAL APPLAUSE- There are even the sounds of sobbing from the audience...]

ROGER: ... Jared I'm gonna change the subject 'cos I'd like to talk about your hair.

JARED: Sure. No problem.

JARED: [Nodding, looking around.] Thanks. Yeh thanks.

ROGER: So, where are you at right now with your hair?

JARED: Roger, I'll tell you where I'm at. Emo hair changed my life.

[Someone from the audience quips "Yeah baby!"]

ROGER: [Hesitates, confused.] Oh, ok. What do you mean Jared?

JARED: [Long pause. We hear the audience shuffling in their seats.] Well, it's like this. I always thought I was emo. But I didn't know what "emo" was. Maybe I was "early emo"- back in 2000 [closes his eyes]. That was around the time of Requiem. I was listening to music, a lot of music. I was enjoying my own company, I thought. 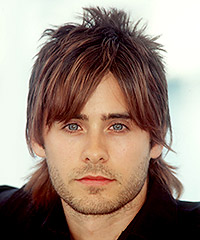 JARED: [Takes a deep breath, re-crosses his legs. The audience is completely silent.] I loved the slightly longer look. I loved my hair a bit wispy. Like, I had a bit of a punk thing happening. That was when I had my "year 2000 style." But it was a bit "Bon Jovi." Don't you think? Yeh, Bon Jovi... [long pause]. It felt great, that hair; when I touched it...

ROGER: [Trying to make up for Jared's seriousness by sounding up beat.] I always liked Bon Jovi, [singing] "I seen a million faces, and I rocked them all." [The audience laughs sarcastically.]

JARED: Yeh, right. I really liked that hairstyle. I talked a lot with my stylist about it. We talked about the razored edges, about how they created texture. And I almost forgot, shape. And the jagged ends too. We talked about them. Lots. With the height at the crown, they made a great combination.

ROGER: And after that style? What was next Jared?

JARED: Well, I loved that style. But something was missing. Something just didn't feel right; like I was a phoney. I didn't know what it was...

[Someone screams from the audience: "You're beautiful Jared!"]

JARED: Thanks. [He puts his fingertips together, as if in prayer.] Yeh thanks. Anyhow, my friend said something to me. He said, "Jared, you're too pretty." I agreed. Suddenly, I understood. I needed to adjust my hair. I dunno, I saw a photo, or maybe not. Maybe I was just feeling a bit... dark. But anyway, I went black. And longer. I felt better. Like something wasn't missing anymore.

JARED: Yeh. So I went black. And two-tone. The red: I love it. It's electric. More layers too. Through the back, they created more shape. And they really enhanced the red. I started to find myself with this hair. I was feeling "right"; you know?

ROGER: [Sounding slightly nervous.] I see. Do you mean you felt more you? Did this give you a renewed confidence?

ROGER: And the eyeliner?

JARED: Yeh. The guyliner; and the gloves. I realized a lot. I realized I was "emo." And as soon as I realized it, it changed my life. It changed my life because I embraced it. After that, I just let it happen. I grew a beard. I wore the guyliner- even to the supermarket. I dropped weight to wear tighter jeans. It just started working.

ROGER: And is that were you're at now?

JARED: Yeh. I always felt too pretty. What was missing was the darkness. It was in my soul and I wouldn't let it out. I was nearly there. That was with the Bon Jovi style. But it wasn't until recently I knew. Now, I am just emo. My hair's a little longer, and I often keep the red. It's just who I am [very long pause].

What do you think of Jared Leto's hair?